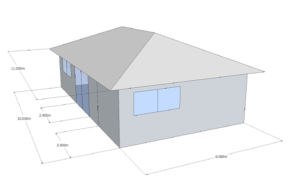 Some people think that LCA is only for IT techs and engineers, but we beg to differ.

We’ve made our software free, easy to use and online so it’s completely accessible to everyone!

We wanted to show you just how quick it is to create an assessment for your building design, so we set Rich the task of putting together an LCA on a granny flat in under 5 minutes.

Check out our video to see if he managed it…

Using our handy templates, Rich was able to assess a simple home design and calculate both the total carbon and energy across the entire design life of the building in the following areas: materials, assembly, transport, recurring and operational.

Sign up to eTool LCA today and give it a go!
Whether you already have a design to try or just want to look at the environmental impact of different materials and methods, you can find all the information in our software here.

A bit of background for those not familiar with the topic of discussion. NatHERS is the rating scheme currently legislated in Australia for encouraging all new homes to be more energy efficient. Rated out of a maximum ten stars, there is now a minimum requirement of six stars for most new homes throughout Australia depending on the state or territory.

Now, it’s important to note that NatHERS only measures and rates the thermal control of a home – that is, the likely amount of energy that is required to heat and cool a home so that its occupants can be warm in winter, and not too hot in summer. Depending on which dataset you’re looking at, thermal control makes up around 23% of the total energy use of a typical Australian household.

The theory goes like this – the more stars a home receives for its NatHERS rating, the less energy that will be required to heat and cool that home in order to maintain thermal comfort – a ten star home could theoretically use almost no energy at all to stay comfortable. However, this depends on which climate zone your home is situated in, as the star bands change for each of the 69 climate zones currently used as part of the rating scheme.

It’s also extremely important to note that NatHERS is not (and was never intended to be) a rating tool used to measure actual energy use in the home – it estimates heating and cooling loads for a home based on a number of assumptions about how we occupy them eg. such as opening windows to improve cross ventilation, occupying bedrooms primarily at night, living spaces during the day etc.
It also doesn’t take into account how efficient an appliance may be at heating or cooling, nor will it account for a person’s individual behaviour e.g. leaving a heating/cooling appliance turned on even if it’s not required to achieve thermal comfort.

That said, it is possible to extrapolate some numbers from the NatHERS star rating bands to determine how much it would cost to keep a home thermally comfortable. In no way is the following graph intended to represent actual costs; it should be considered only as a relative guide between the different star ratings: The graph is also based on the following assumptions:

We’ve used the star rating thresholds for Perth (remember, these change for each of the 69 climate zones around Australia)
Have assumed a house size of 300 square metres
The heating/cooling appliance has a coefficient of performance (COP) of 1.0 – that is, for each unit of energy that needs to be added or removed from the building to maintain thermal comfort, the appliance doing this work will use one unit of electricity (in reality, a really efficient reverse-cycle air conditioner will have a COP of 3.0-4.0 ie. be 3-4 times more efficient)
The cost of one unit of electricity is around 25 cents (BTW 1.0 unit of electricity = 1kWh = 3.6MJ)
Doesn’t take into account the actual behaviour of the building occupant (eg. assumes heating/cooling appliance will be operated only when necessary)
As you can see, and would expect, the likely cost of heating/cooling a home decreases as the star rating increases. However, as you can also see, the potential saving is inversely exponential – that is, the amount of money you can potentially save decreases as the star rating increases.

This is a very important point to make. For example, consider the threshold between moving from 5 to 6 stars – there’s a potential saving of around $400.00 a year in heating and cooling costs, which we would argue is a saving worth making (we can think of a couple of things we would rather spend that kind of money on). We would also argue that it is a comparatively small cost increase to build a six star home as opposed to a five star home – some major builders are even doing this already without passing on the cost increase to their customers. Thus, the payback period is reasonably achievable.

However, now consider the jump from 9 to 10 star. There’s a potential saving of around $271 per year by doing this, which would mean a heating/cooling bill of less than $100.00 a year in Perth. However, if there is a substantial increase in the building cost in order to achieve this rating, it could be argued that the extra cost is difficult to justify. Depending on the design and climate, it may be better to aim for a lower rating that can be achieved for a more reasonable budget, and to then spend the extra money on solar PV to offset carbon emissions, or buy a more energy efficient fridge or TV (remember NatHERS doesn’t consider energy used by appliances, which by itself can represent around 15% of total residential energy use). Nor have we considered other environmental initiatives separate to energy efficiency, such as installing a rainwater tank or planting natives, or a waterwise garden.

Now in no way should this post be misconstrued to suggest that eTool thinks that star ratings are a bad idea, we sincerely believe NatHERS is a valuable rating tool that assists building design professionals to design more energy efficient homes, and that it is important to do so.
However, if we get fixated just on winning more stars and saving dollars, then we’ve failed to comprehend the bigger sustainability picture. There are other effective ways we can (and should) promote building sustainability, such as making our homes more naturally comfortable and enjoyable, improving the design quality of the built environment, leading healthier lifestyles – these are just a few.

It’s also important that we remember that NatHERS only focuses on one part of the sustainability spectrum, and there are additional areas equally worthy of our attention, such as choosing energy efficient appliances, how we live in our homes, health impacts of building materials, reducing construction waste and embodied energy impacts, water harvesting and re-use – the list goes on.
We don’t believe this diversity confuses the sustainability debate, but goes to highlight there are many things we can be doing to have a positive, beneficial impact on the environment, and that do not necessarily compromise our lifestyles, but actually enhance them.

“Zero carbon building development is easy… with the right planning”

The built form is responsible for approximately 30% to 50% of Australia’s total carbon footprint.

Globally and now in Australia there are many examples of buildings that produce more energy than they consume and are theoretically “zero emission” buildings. These range from everyday mums and dads with standard 4×2 houses through to high rise commercial buildings. We now have the technology to be energy efficient and produce renewable energy at a cost effective rate to offset the buildings “operational energy”.

The largest component of a buildings carbon footprint is fast becoming “embodied energy” – the energy used to manufacture the materials, transport, assemble and then maintain them. The best way to reduce this embodied energy impact is through intelligent planning.

Plan for the future – the average Australian residential building is lucky to get much past its 50th birthday. The single biggest reason for a building to be knocked down in Australia is for redevelopment.

Plan for functionality – in the past 20 years our houses have grown in size by 40% while occupancy has dropped by 10%.

Intelligent planning ensures buildings last longer while increasing their functionality. The great news is once you are able to quantify these impacts (which eTool LCA can) it’s pretty easy to get the planning right.

With the introduction of the mandatory 6 star rating this month to Western Australia, the bar has been raised for energy efficient buildings, but in our minds only just a little…

Contrary to what the average home buyer might think, the star rating only really accounts for the thermal performance of the house, about 25% of the total energy and carbon footprint. At eTool, we think if you’re genuine about intelligent and sustainable design you need to consider the entire picture, from the embodied energy in the construction through to all the operational energy over the design life of the building.

Rather than concentrating on thermal performance alone and ticking a few boxes, we want to see innovative building design that really tackles our energy consumption problem, lowers our carbon emissions and ensures we’re spending our money in the right places. We would love to know what you think too, so tell us on Facebook…