Below is a summary of our approach to the International residential benchmark.  A full EN15978 report on the benchmark model can be found here.  International Residential Benchmark Weighted x10 dwellings v28

In light of eTool’s recent exploration into global markets, we thought it prudent to create a “global” benchmark for housing developments.  eTool will be using this benchmark for all future housing projects. The reasons an international statistically mixed use benchmark is the most robust model to compare designs against are as follows:

Before getting into the nitty gritty, it’s important to understand the purpose of the eTool benchmark, which is:

The statistics used in the benchmark are based on data obtained for each country. The construction type and dwelling size statistics take new build data wherever available, as this data is generally reliable and represents a picture of the way buildings are currently being built across the developed world. For residential buildings there is a mix of houses and apartments. This is the latest breakdown of the new dwellings density mix across the countries considered in 2010:

The occupancy is calculated by dividing teh countries population by the number of dwellings to give an average. This is weighted by population to give a global average of 2.52.
For the single dwelling element (59% of our average dwelling) a building structure has been modelled taking a cross section of commonly used construction techniques. In this instance, the data was obtained for U.S.A.  The U.S.A makes up the largest proportion of new housing in the developed world and is considered to represent a fair “average house.”  Construction techniques are unlikely to differ significantly enough to impact on the overall modelling, whilst brick houses may be more common in the U.K. and Germany, timber framing is far more prevalent in Japan and Sweden.

A similar approach was taken with windows, internal walls, floors and roofs. The vast majority of those installed in new builds across America and Europe are double glazed and allowances have also been made for the smaller proportions of other window framing options currently in common use.

For the multi-family dwellings, a standard concrete frame structure has been taken with one level of car parking and typical auxiliary and common layouts, such that the apartment living area represents approximately 50% of the total floor area of the building.  The total impacts of this building have been weighted on a per m2 basis and 56 m2 has been added to the model to represent the apartment element.

Existing data has been used for operational energy, and arguably new build data would be preferable, but total existing data is generally a lot more robust (and readily available). Whilst new build energy figures were available for some countries, the figures tend to be from modelling completed for regulatory purposes and are therefore theoretical. In many countries there is a perceived “performance gap” between modelling results and actual consumption mainly due to differences in occupant behaviour, but also because of limitations in software and methodologies used for the modelling. The hope is that there will be continued industry effort towards monitoring of new build housing performances. Until further data in this area is available, we have a robust snapshot of how average buildings are currently performing by taking existing housing data.

The data for total residential fuel consumption was divided by the total number of dwellings in each country analysed. This was then weighted according to population to give a final figure for the average energy consumption of a developed country dwelling.

End-use percentage estimates were then used to determine where this energy is being used in the dwellings.  Again, U.S. data[ix] has been used to represent the average. 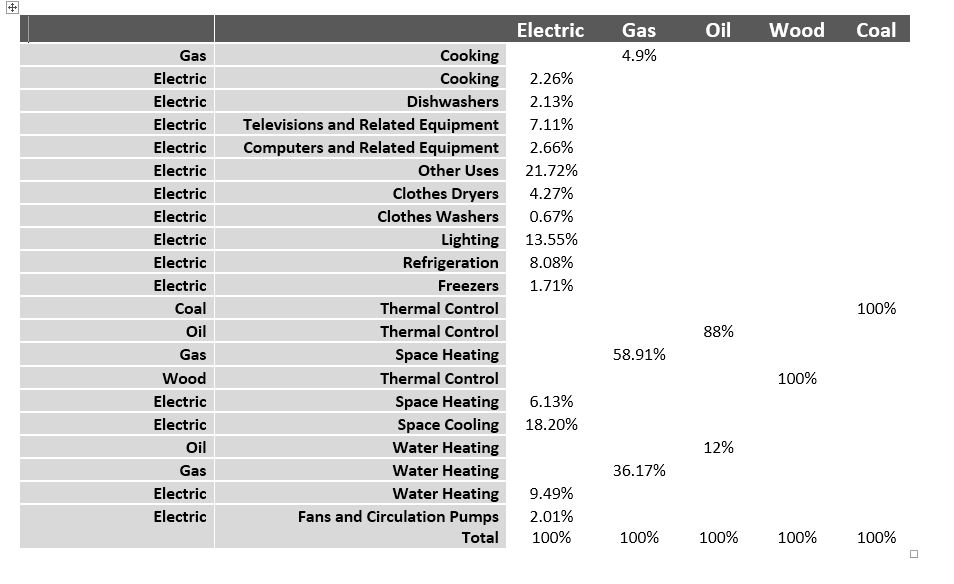 Other impacts such as appliances and cabinetry and finishes have also been included by the estimated proportion of dwellings estimated to include these.

The global average water consumption is considered fairly consistent across most developed countries with America and Australia having higher water consumption due to larger garden sizes.  A conservative nominal 169l/person/day has been assumed for water supply and treatment.

[i] Populations by country 2010 http://countrymeters.info/en/United_States_of_America_(USA)

[vii] Odysee energy database for EU and Norway (2008) downloaded from http://www.odyssee-mure.eu/ in July 2014

How We Are Making LCA Available to Anyone, Anywhere