With the tremendous uptake of residential solar PV installations all around the world, the next question that often comes to mind is: to stay grid connected or go off-grid? For most people who are concerned about environmental issues, they might be led to believe that completely weaning off our fossil fuel powered grid is the truest form of sustainable living. However, here at eTool we like to challenge people’s beliefs based on data from life-cycle analysis.

To start, let’s quickly look at the difference between the two systems. 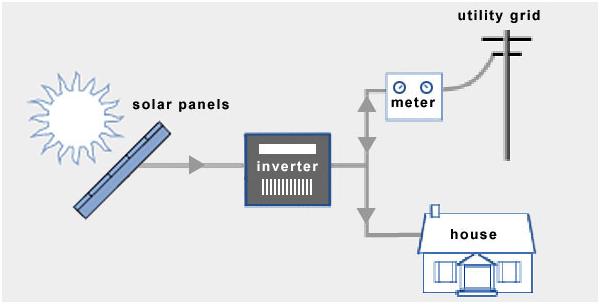 A grid-tied system is connected to the utility grid. In new systems, there is only one meter that measures both in-coming and out-going power to the house. Power generated from the solar panels goes through the inverter which converts DC to AC which then used throughout the house. Any left-over power that is not used goes out to the meter where it is measured then fed into the grid to be consumed elsewhere. This system has no on-site battery storage so any solar power that is not used at the time it is generated will be fed directly out to the grid. When no energy is generated by the solar panels such as at night or on overcast days, power will be drawn back from the grid to supply the house. 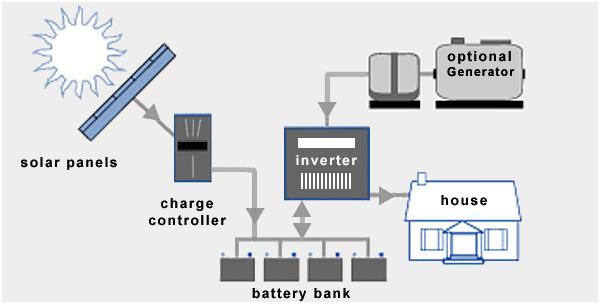 An off-grid system means that the system has no connection to the grid at all. In this situation, battery storage is necessary in order to provide power to the house when there is no power generated by the PV system. An additional on-site generator may also be required as a backup in case the stored power runs out. In this system, the power from the solar panels goes through a charge controller or battery regulator then into the battery bank for storage. On demand, the power is drawn from the batteries through an inverter then to the house to be used. If the power stored in the batteries run out, a generator can be started to produce backup energy.

In order to compare the systems, we will use LCA to quantify the impacts in CO2e. We assume that all other factors are constant such as water, gas and the carbon intensity of the grid. The table above shows the building structure and appliance specifications for a standard Australian detached home. Only the PV systems will change in order to better compare the difference between grid-tied and off-grid. 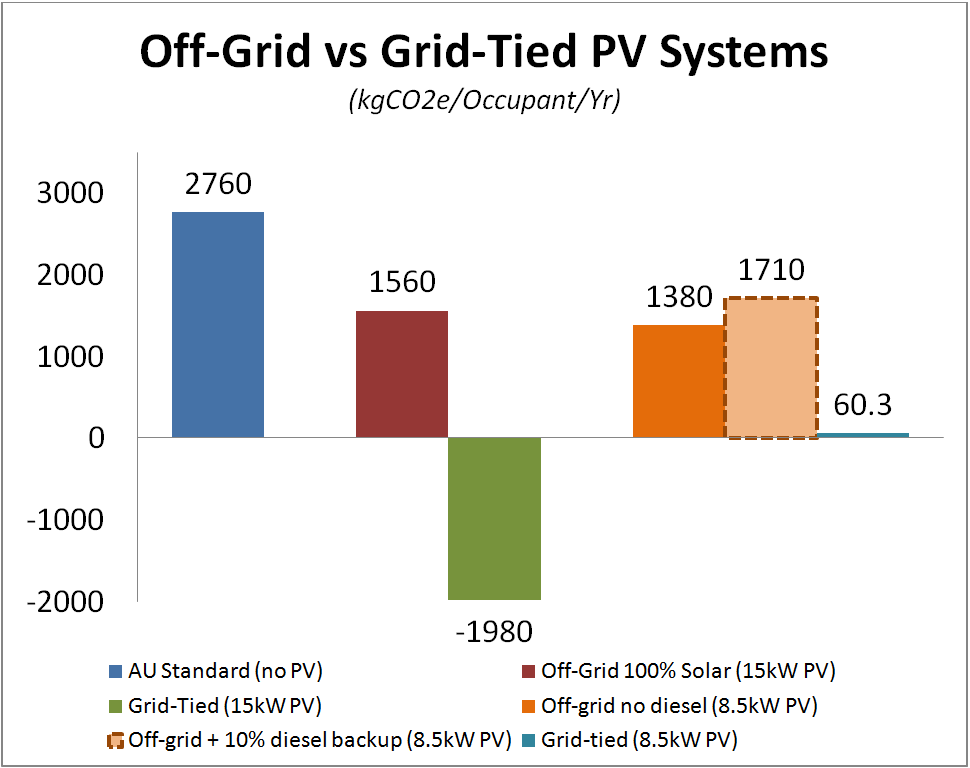 The blue column on the left in Graph 2 above is a standard Australian home with no PV. The red column is an off-grid system sized to provide 100% solar power throughout the year. This is a 15kW PV with about 100kWh of battery storage to provide backup power for 3 days while the green column is the grid-tied version with 15kW of PV without battery storage. The orange& dotted columns show the impact of a smaller off-grid 8.5kW PV system with 60kWh of battery storage. The dotted orange column has an additional backup diesel generator that provides 10% of the energy demand. The teal column on the right is the grid-tied equivalent with 8.5kW PV and no diesel backup or battery storage.

We can see that installing a PV system alone has a significant effect at reducing the CO2e impact of the building. Note that despite a near two-fold increase in the amount of PV, the life-cycle carbon savings in the off-grid system only has marginal improvement when compared to the grid-tied system. This is due to the high embodied impacts of the larger PV system which are underutilized in the off-grid system whereas in the grid-tied system all extra power generated by the over-sized system is fed into the grid. 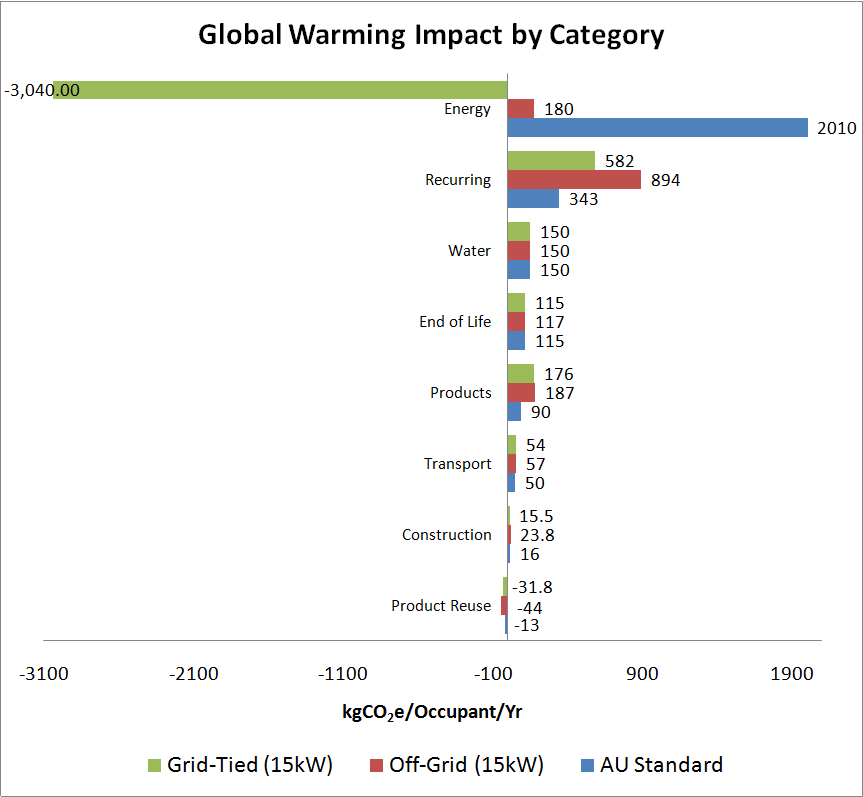 In the graph above, we compare the category breakdown of the 15kW PV systems versus the AU standard home, we can see that while the life-cycle energy use of the solar powered homes have dropped significantly, the recurring impacts on the other hand have increased due to the impacts related to replacing PV panels and batteries.

In areas with cleaner grids, in this example I’ve used the Tasmanian grid (even though it is still connected to the NEM) – is a grid-tied PV system still relevant? 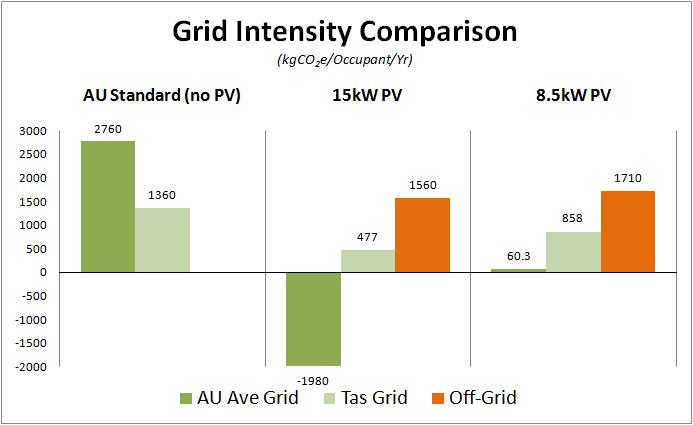 The graph above shows that although the proportion of savings is much less in a low-carbon grid, a grid-tied PV system still has a lower life-cycle CO2e impact compared to an off-grid system. In areas with cleaner grids, the embodied energy impact of the building becomes proportionately more important than the operational energy as shown in the graph below. 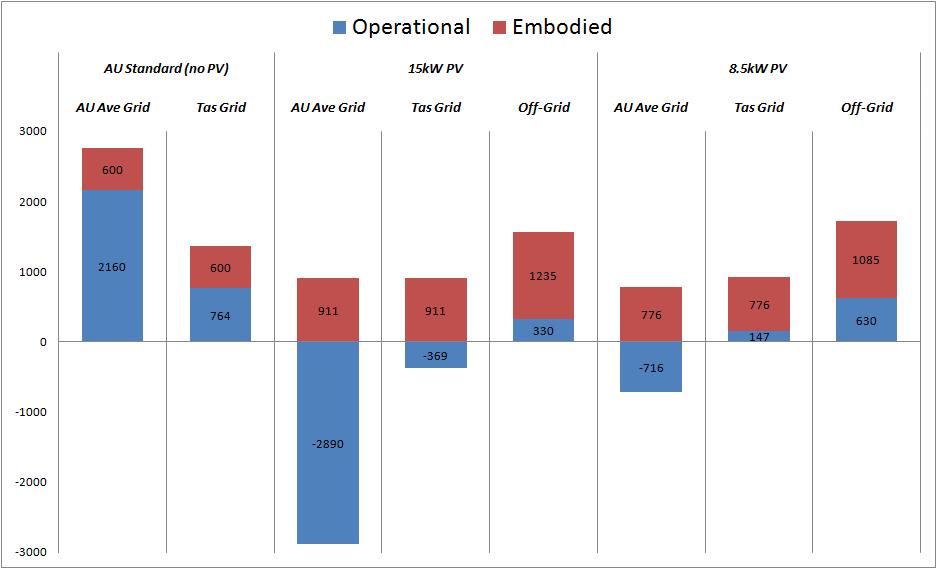 How about a house that is designed by someone who knows what sustainability is about? Let say they designed using low-embodied energy materials and didn’t install any air-conditioners – how would such a house compare? The low-impact or ‘best practice’ design building assumes that the occupants are more sustainably conscious and try to reduce electricity demand as much as possible in the choice of appliances they will use and are more likely to build with low embodied impact materials such mud brick. A detailed list of specifications in the ‘best practice’ house are listed below while still assuming Australian averages for water and refrigeration energy use. Based on these specifications, the off-grid ‘best practice’ home will need 4kW of PV and 48kWh of battery storage assuming 10% of the energy demand to be provided by a diesel generator.

The graphs below show the global warming impact of a ‘best practice’ home on an Australian average grid the embodied and operation energy breakdown and the carbon impacts on a low-carbon grid. Even though the overall life-cycle carbon impacts of the building has dropped significantly due to the ‘best practice’ design, the results still indicate that being grid-connected is better for the environment in both grid situations. 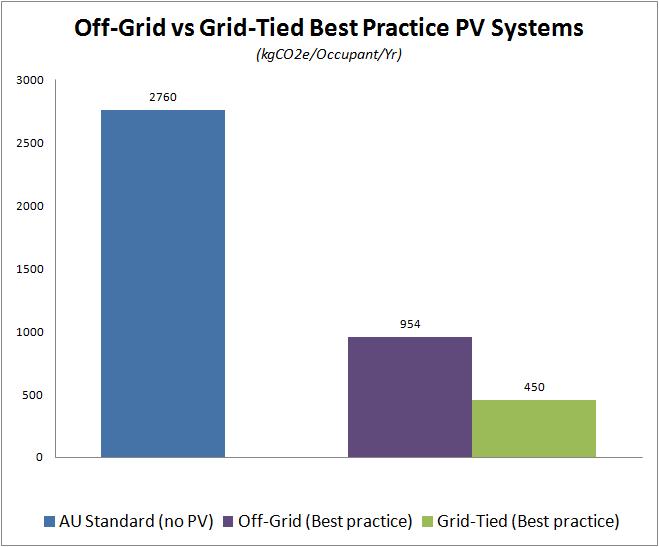 In areas with carbon intensive grids such as Australia, it is important to help ‘clean up’ the grid by staying grid-connected with our PV systems. This is due to the fact that all the excess potential energy from off-grid PV panels is ‘wasted’ instead of captured to be used elsewhere. An off-grid setup will usually have a PV system that is large enough to meet most of the energy demand of the household throughout the year. This means that the system will be sized to produce enough power in winter but in summer when there is more daylight, the extra electricity generated by the system will be wasted.

A grid-tied system on the other hand is able to take advantage of an existing energy network and maximise the energy generation potential of their PV systems as any excess energy is fed back into the grid to be utilised elsewhere. This means that the embodied energy of the building can also be offset when the building produces more renewable energy than it consumes throughout its life.

A cleaner grid also means that other homes, offices and industries such as water desalination plants and manufacturers that use this cleaner electricity will be less carbon intensive. We all benefit from the knock-on effects of staying grid-connected.

For areas where the grid is already ‘clean’, the operational energy impacts become less significant from a carbon perspective but you’re still better to have grid-tied PV. Staying connected in a green-grid also helps avoid the additional embodied impacts from an oversized PV & battery storage system. 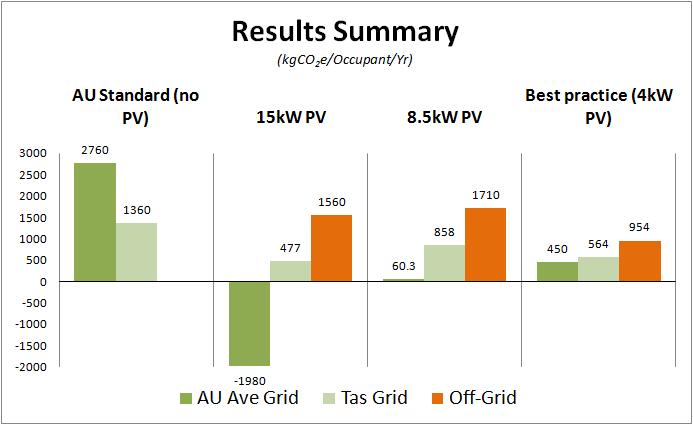 Bear in mind that there are other resources and technologies that haven’t been modelled here which may provide better solutions by taking the best of both systems. For example, hybrid systems combine the advantages of grid connection with battery storage to help moderate grid loads. To provide an efficient solution to large scale energy distribution, ‘Smart Grid’ systems that monitor and control the grid’s energy distribution and production is the way to go. Combine smart grids with hybrid solar systems and the economics and efficiency of renewable energy distribution and supply grid will be greatly improved. Nevertheless, the underlying message still points to the fact that staying grid-tied is the key in order to stay most sustainably relevant today and in the future.

LCAs For Buildings Now a No-Brainer
Scroll to top