As part of an overall environmental strategy stipulated by the State Government, LCA has been integrated into the design and construction of Perth Stadium.  eTool produced life cycle assessment analysis in three stages forming part of the overall design strategy as outlined below. 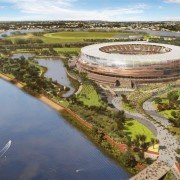 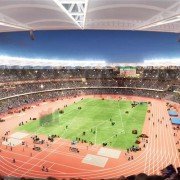 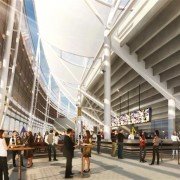 Stage 1: An initial “Targeting Study” was completed during bid stages whereby two initial models were developed – an initial LCA model of Perth Stadium and a benchmark LCA model of the already constructed Etihad Stadium (Melbourne) which was considered a typical stadium build.  From the outset, Perth Stadium was indicating an improvement over the benchmark due to the predominantly steel structure which is inherently lower in CO2e emissions compared to concrete structures.  The targeting study also highlighted a number of CO2e hotspots such as food and drinks refrigerators which are typically left on between games.  Controls to switch off non-perishable items between events were an obvious easy win and one which the design team was confident in being able to implement.

Stage 2: As the design progressed, further information became available and the models accuracy was increased and consolidated with bills of quantities.  With steel and concrete contributing the majority of the embodied impacts, it was important that these elements were accurate.  The refrigerant gasses for chillers and food refrigerators was also included which contributed over 2% towards the total CO2e impacts, with the Stadium seating also found to have very high recurring impacts.  Strategies put forward included using a low impact refrigerant such as CO2 and specifying extended warranties for the seating in order to increase the duration of their useful life (hence lowering their impact).

Stage 3:  The model was finalised to include all recommendations uptaken as well as final quantities for materials and energy modelling figures.  The design team were able to implement the following:

The State LCA requirements were as follows.

– a 7% reduction against the benchmark in product stages (A1-A5)

The LCA analysis was able to successfully show performance against these impacts and quickly develop effective strategies to meet the targets.  The final design specification shows overall life cycle impacts of 7.68 tCO2e/seat/year; which when split across the planned 37 events per year results in impacts of 0.2 tCO2e/visit.  This exceeds the targets with a

The study also highlights the importance of taking a Life Cycle approach towards targets.  When targets are set for individual elements perverse outcomes can occur.  For example, PV panels are very effective in reducing life cycle emissions in Western Australia, however in this instance they would negatively affect the maintenance target (due to the replacement of the panels).  eTool recommends that a single whole of life approach is taken to ensure absolute environmental benefit is achieved.