Blog - Latest News
You are here: Home1 / eBlog2 / Building3 / Are we running out of building materials? 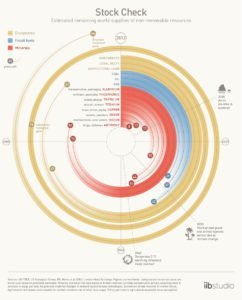 The above infographic from the BBC implies that we will run out of copper in 32 years.  This is calculated by taking the current reserves (about 700Mt) and dividing by the current annual demand for primary copper production, the infographic is well researched.  But…

In 1996 global copper reserves were only 310Mt and since then we have consumed about 310Mt of primary copper.  Exactly the same methodology in determining how long the resource would last, so why haven’t we already run out already?

The answer lies in the detail of the data.  Reserves are mineral deposits that are at an advanced stage of exploration and have been proven to be economically viable at current commodity prices. They are a very small proportion of actual known quantities.  Resources are estimates of known quantities based on some exploration data with some potential for economic extraction.  There is typically at least an order of magnitude more resources than reserves. In the case of copper there’s about 3,000 Mt of copper resources that are somewhat well understood (explored).  It’s further estimated that there is 300,000 Mt of copper in near-surface deposits (including the sea bed).  So we’re unlikely to “run out” of copper for 15,789 years at current levels of demand based on estimated quantities available on Earth.

What we pay for copper moving forward is another story.  As much of the copper could be harder to extract than current deposits prices should go up.  But technology also changes the cost of minerals extraction.  Exploration, mining and processing technology, as well as economies of scale all, play a part in the overall cost of delivering the product to market.  This presentation shows that costs have actually decreased by 70% between 1905 and 2007 due to technological breakthroughs.

So the BBC Infographic is somewhat exaggerating the real extent of the problem.  That’s not to say some minerals are legitimately in short supply. When this happens prices go up and typically the economy reacts by a combination of:

If the world was truly facing a shortage of plastic, for example, the industry would be placing efforts into removing waste and designing all new products that contain plastic in a way that it can be easily separated and recycled. As it currently stands it is a very cheap material that has an abundance of supply meaning the motivations to reuse are lacking.

Although finite resource use is a potential problem, when the facts are explored it’s not as urgent as global warming.  From a sustainability perspective, resource availability is often more of a social/economic issue than an environmental one.  Our ecosystems, biodiversity and human health aren’t really affected if we use up all the copper and it ends up in landfill. What the planet really needs right now is for us to keep global temperatures as far below 1.5 degrees as possible!