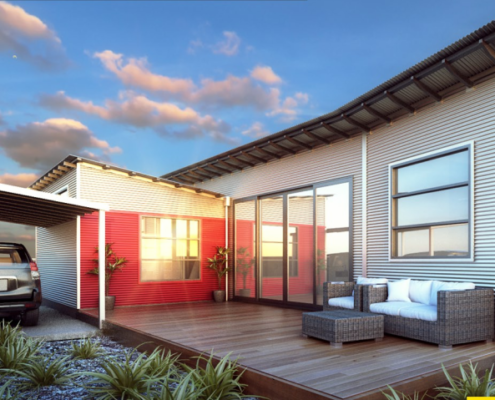 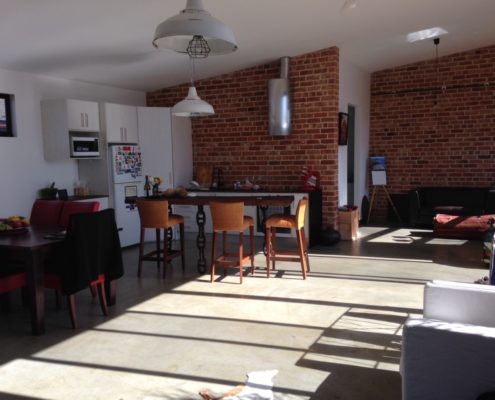 The Emily St Residence is a project for an owner builder whose main objective was to live in a healthy building that worked with the local environment and to demonstrate that a sustainable house can be built on a comparable budget to a project home builder. Sustainability House is embracing Life Cycle Design and they are now eToolLCD Consultant subscribers, and they used the eToolLCD software to quantify whole of building environmental performance for this project.  This project is an excellent example of the critical role of design in energy efficiency and underscores Sustainability House’s expertise in assisting residential projects to improve energy performance far beyond minimum compliance. The brief was to optimize the building fabric and deliver an economical building that will use minimal energy – therefore minimising the ongoing running costs. It includes improvement strategies such as alternative lightweight construction methods, healthy low impact building materials and solar PV for electricity.

Sustainability House’s design division, SuHo Studio, was engaged to take this project from concept drawings through to full documentation and planning approval.

It is observed through the LCA modeling that the following areas have the greatest impact to the overall environmental footprint of the building:

The design incorporates fundamental passive design principles; bedrooms to the east, to wake with the sun and be cool in the evenings; living areas to the north with good northern glazing, to allow winter sun deep into the building envelope; and utility areas to the west, so they can absorb the strong summer sun in an area that is infrequently occupied. Shadow modelling allowed us to optimise eave depth and offset so in summer solar radiation is blocked. The final house design is 125m2 on a 330m2 block, which is small by Australian standards but building smaller means less expenses upfront and less ongoing living costs.


Sustainability House simulated thousands of wall, insulation and window combinations to reach the highest NatHERS star rating possible for the building at the agreed budget. 3D modelling and sun path analysis assisted in the design of shading devices, eaves depths and window locations.

The project was designed for reduced energy demand and achieved a high thermal performance rating of 7.5 stars with ceiling fans as the cooling method, high efficiency LED lighting and a solar PV system to produce electricity for water heating and cooking. A 3.5 kW solar system combined with battery storage (to be installed late 2016) will further enhance the 96% savings in operational energy with a target of reaching net zero carbon in operations.

Testing Of Performance After Completion


The building was air pressure tested and assessed using thermal imaging to ensure good build quality. A monitoring system was designed and installed to collect data on actual building performance, which will be compared against the predictive performance from the modelling software. The monitoring system tracks internal temperature and humidity, energy consumption and solar electricity production. Also a weather station on the roof monitors external temperature, humidity, wind direction, speed and rainfall.

The house was built using a Structural Insulated Panels (SIP) walling system, to make the build simpler and quicker, which resulted in the building being locked up in less than three weeks.

This assessment was conducted by Aida Leon of Sustainability House and certified by Tom Beckerling from eTool.