eTool were recently engaged to revisit the Sustainability Learning Centre.  We completed the original LCA of the building back in May  2012 with the construction being completed in November 2012.  The building performed very well achieving a 99% saving against the eTool benchmark through features such as innovative materials, Solar PV, use of thermal storage and vegetable oil for heating and hot water  (the original case study can be found here).   The building is under-going a green star assessment and we got stuck back into the model to present findings and reporting to award the Green Star LCA credits. 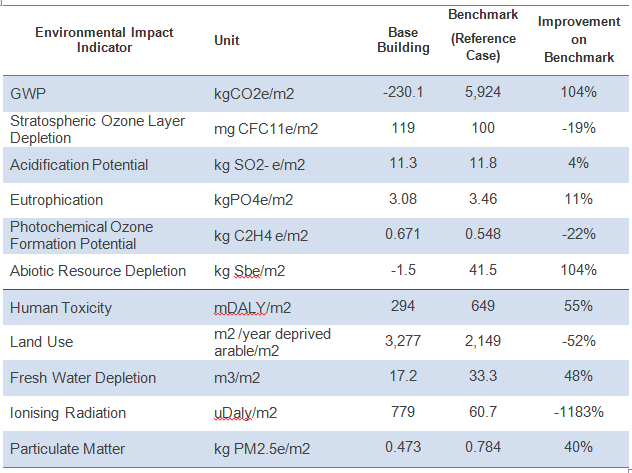 ClinkaBloks and ClinkaFill was used throughout foundations and floors.  Clinka have completed an Environmental Product Declaration for for their product and this was used in the LCA modelling. EPDs provide actual manufacturer specific LCA data.  When manufacturers go to the effort of measuring a products full life cycle impacts they will be able to make decisions to reduce those impacts.  Generally therefore EPD data tends to show an improvement over industry average life cycle inventory data.   Incorporating EPDs into eTool LCD is a fairly recent feature and this is the first time we have used an EPD in an LCA.  We hope that many more will follow promoting competition between manufacturers to produce the most sustainable products.

Vegetable Oil as a Heating Source

The building uses “waste” vegetable oil from its canteen to provide heating.  When we completed the assessment back in 2012 we did not have data for vegetable oil and used biogas as a proxy.  We now have data for 3 different vegetable oil options – virgin, waste and 40c/litre.  Which one to use raises an interesting point on allocation which under EN15804 follows economic division of emissions when a material has a combined purpose (e.g. cooking and heating).  The table below shows the emissions of 124,920 MJ of heating oil.

The results show that waste vegetable oil is an improvement over diesel across all impact indicators with zero impacts for a GWP, Land, Ozone, Human Toxicity, Abiotic Resource Depletion and Ionising Radiation. However it is assumed unlikely that vegetable oil will be considered a waste product throughout the whole life cycle. As alternative fuels become more prevalent there will be a value associated with these “waste” products.  A value of 40c per litre means there are some significant impacts that are now attributed to the waste oil. Land that is required to grow the crops that produce the oil has over 1000 times the impacts of diesel.  Most other impacts are also higher than diesel with the exception of GWP and Abiotic Resource Depletion.  For this reason it may be considered that vegetable oil is no

In light of these results eTool consider vegetable oil to not be the most sustainable solution when other heat sources such as solar thermal or timber are available.  The best solution for the planet is to save the vegateble oil for other applications without an alternative such as heavy agricultural or industrial machinery that cannot be viably electrified.

Given the complexity of the fuel mix for the actual and reference case buildings, serious consideration has been made regarding what the most appropriate benchmark to be measuring against is. (For Green Star a benchmark is chosen to represent the same like building in the same location built to minimal regulatory requirements as opposed to the eTool benchmark which takes a global statistical average for the building). The waste oil as a fuel source is displacing either gas, or electricity.  Similarly the Solar PV energy is displacing electricity.  There are two scenarios; one which takes the average Au NEM electricity grids for electricity supplied and exported for both benchmark and actual case, the other would assume the local Tasmania grid for both models.  The two scenarios have a significant effect on the results as shown in the table below. 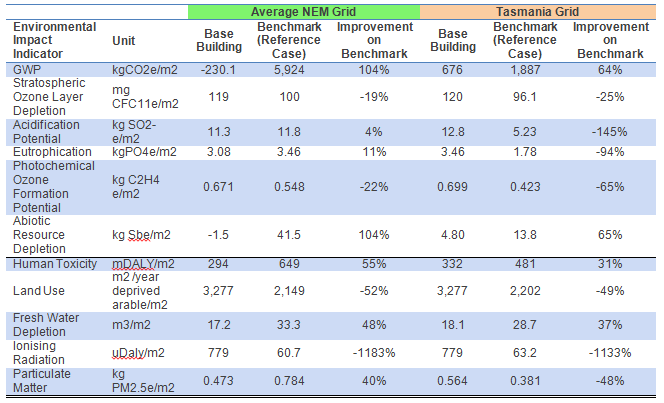 Assuming the average grid is used, the PV exported has a very high impact on the performance and makes up for the emissions associated with the vegetable oil and biomass.  However under the Tasmanian grid the PV is offsetting already very low carbon electricity and the emissions associated with vegetable oil and biomass burning mean that the base building in this scenario does not perform very well against the benchmark.  This is particularly true for Acidification Potential, Eutrophication Potential and POCP.  The cumulative improvement in main impacts over the benchmark under the NEM scenario is 181% however, there is actually a 200% increase in impacts under the Tasmania grid scenario.

Given that EN15978 is not entirely specific on the matter of which electricity source should be used other than to say “current supply”, to ensure the study is making a fair comparison between the actual design and the reference case consideration was given to the specific electricity that is going to be displaced by these alternative energy sources.  In other words, what will be the likely consequence to external energy use by these energy sources reducing electricity demand?

Scenario 1: The electricity demand in Australia continues to retract (or plateau).  In this case the building is accelerating that contraction, so the energy displaced would be that produced by the power plants being shut down under that contracting market.  It’s highly unlikely that the Hydro power that makes up most of Tasmania’s supply will be shut down prior to most of the dominant energy sources on the mainland.  There are a few reasons that justify this assumption:

Economic: Hydro is a very cost competitive energy source, particularly once the capital costs have been sunk

Environmental: Hydro is a very attractive energy source in a carbon constrained economy particularly when compared to the coal dominated mainland electricity supply

Practical: Hydro power can be ramped up and down on demand without significant inconvenience or cost to the generator which is stark contrast to large coal fired plants that run more inefficiently with fluctuating output

In this scenario it would be more appropriate to compare the projects by assuming supply was from the NEM average electricity mix.

Scenario 2: The other scenario is that electricity demand grows (and this building forms part of that growth).  To understand the implications of this we need to “crystal ball” what type of additional supply would be brought on to meet this additional demand.  The short term scenario would likely be that spare existing capacity on the mainland NEM would be ramped back up to full production (essentially increasing the coal and gas intensity of the electricity mix).  In the medium to long term however it’s likely that new power plants will be fired with low carbon fuels or renewable energy due to the environmental targets that have been set for Australia (currently committed to an 80% reduction in GHG emissions by 2050).  In this scenario it would be more appropriate to compare the projects by assuming supply was from the Tasmanian average electricity mix.

Preferred Electricity Supply Scenario for study: Given that we are now over 6 years into a downward trend in demand (by 2014 the NEM metered electricity demand had nearly contracted 9% since it’s peak in 2008) the scenario 1 seems more likely at least in the short term to medium term.  Although we have reported both electricity supply scenarios, scenario one is more aligned with the current trends, and hence the marginal supply (due to economic, environmental and practical reasons) that will likely be displaced by the alternative fuels in the building are more likely to be from the NEM average fuel mix than the Tasmanian fuel mix.  For this reason the NEM average fuel mix has been chosen as the preferred comparison method in this study.

The table below summarises other differences between the updated and original model.  One other notable change was our treatment of the recycled steel cladding.  We originally took this to have zero impacts and did not include it in the model.  Since 2012 we have updated data on average recycling rate of metals and have the ability to input their specific recycled content following the recycling rules of EN15978. 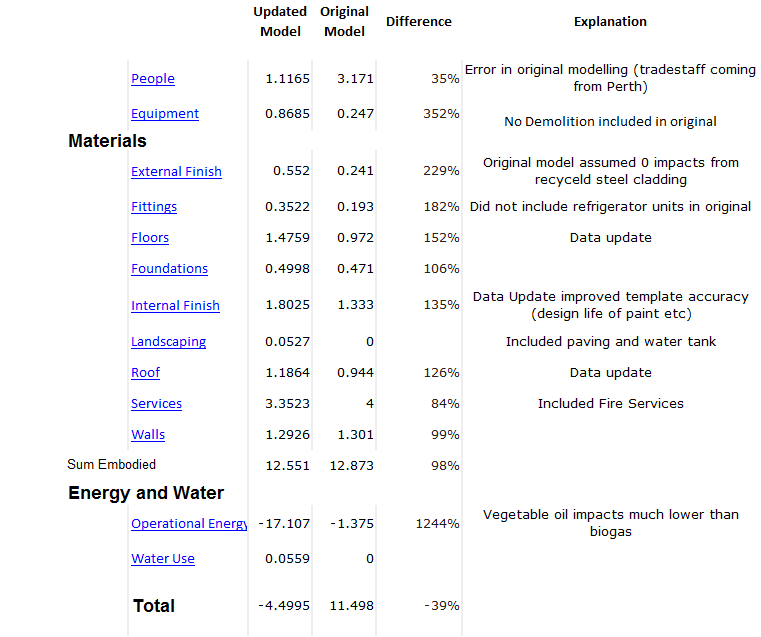 The design team has kindly allowed eTool to publish the fully compliant, peer reviewed EN15978 report that we completed for the buildings Green Star certification.  See here for the full report.

This LCA study was commissioned by Clinka Australia, contact them to find out more about their innovative building materials.  To find out more about the project, visit Greening Australia. For more information on the building design contact morrison & breytenbach architects. Alternatively please contact eTool to arrange a cost effective assessment or training on how to achieve best practice in low carbon building design.

This assessment was conducted by  Pat. 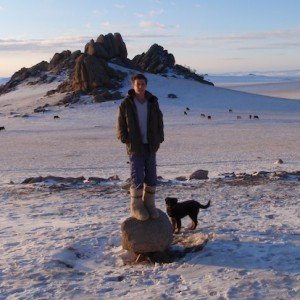